We already know that hazardous waste sites and oil spills can have detrimental effects on the environment. But without monitoring and assessing those incidents, how can we mitigate the damage?

The answer is, we can’t--at least not without a model for studying and addressing the problem. And that’s exactly why the Natural Resource Damage Assessment (NRDA) was established. NRDA is a legal process that outlines a way to address hazardous waste incidents, evaluate the extent of the damage, and determine restoration needs.

Below, we’ll dive deeper into this process and discuss why it’s such an important environmental measure.

One of our recent articles focused on the Comprehensive Environmental Response, Compensation, and Liability Act of 1980 (CERCLA), the first U.S. legislation to address hazardous waste disposal.

One component of this act involved establishing NRDA regulations, which included protocols for conducting assessments when toxins are released into the environment.

CERCLA also designated natural resources trustees, including Indian tribes and states, and federal agencies like the National Oceanic and Atmospheric Administration (NOAA), to oversee response efforts and work with responsible parties to assess and remedy the damage. 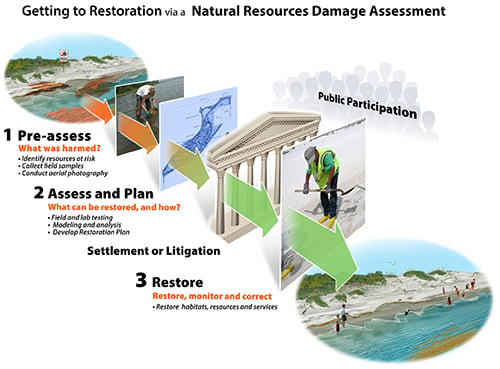 When responding to an incident involving hazardous substances, the trustees and federal and local agencies collaborate to initiate the NRDA process.

The first step involves a pre-assessment to determine the impact of the damage and at-risk resources. This may involve taking aerial photographs and collecting field studies. With a better understanding of the injuries to the environment, they can then begin building a restoration plan by figuring out what can be restored and how. They use this plan to initiate projects with the goal of restoring the environment to what it was like pre-incident.

The investigation into the oil spill off the coast of Orange County, California, is a recent example of NRDA in action.

On October 2, 2021, the United States Coast Guard contacted the NOAA regarding what appeared to be oil in the water off the shores of Huntington Beach. The NOAA jumped into action, capturing satellite imagery of the spill, which revealed the oil spill spanned more than 30 miles--an estimated 131,000 gallons of oil. The amount spilled was actually about 25,000 gallons, almost five times lower than previously estimated.

As part of the oil spill investigation, the NOAA joined forces with the trustees to kick off the NRDA process. Many agencies were (and are still) involved in assessing the damage and creating a game plan. For example, the NOAA Fisheries set out to discover and rehabilitate oil-impacted animals and determine if any endangered species were at risk, while the National Ocean Service Office of Response and Restoration provided oil spill trajectory modeling.

Using these findings, they can develop projects to help restore the local habitat along the California coast.

NRDA is an important process that helps with restoring the environment after the release of hazardous substances, but what happens if you and your vessel are responsible for the oil spill? Accidents happen, but insurance can protect you.

Contact us here at Safe Harbor for more information on marine insurance, so you can get the protection you need.

Safe Harbor is a Subsidiary of

Learn more about our group companies:

Safe Harbor has a team of qualified professionals in all verticals of coverage that we offer. Please contact us for more information and we will get in touch with you shortly.